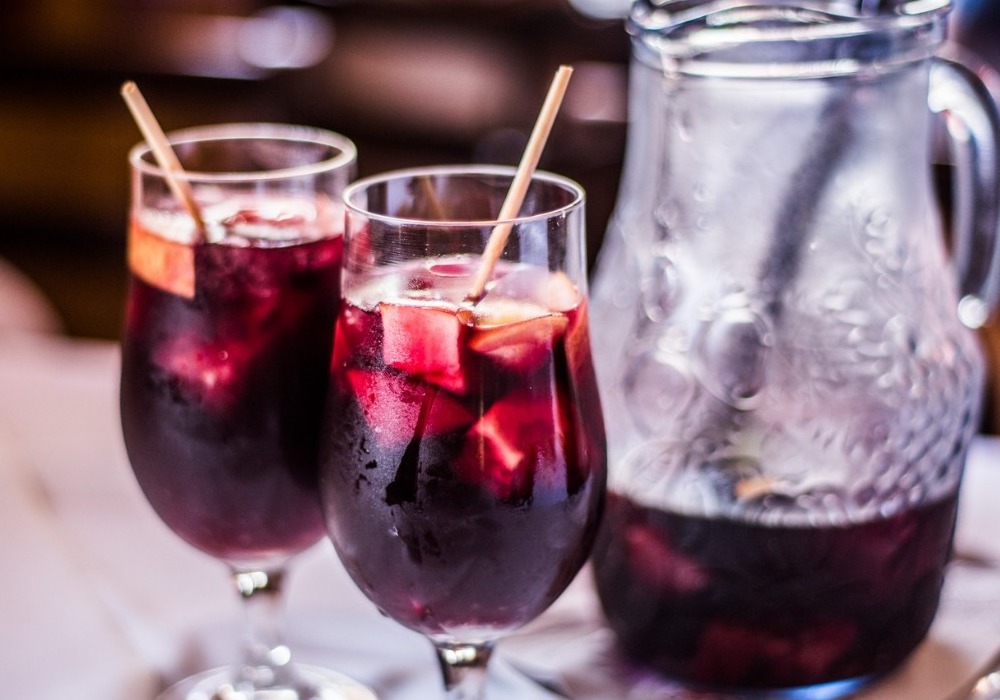 Top most popular drinks in Spain

Sangria is a traditional Spanish very tasty refreshing cocktail (from the Spanish sangre - blood). His birth was celebrated 4 centuries ago in the very south of Spain. It is the southern part of Spain that is especially rich in fruits. Sangria is made from red wine diluted with spring water. In those distant times, he saved from the exhausting heat, And being light enough, did not cause intoxication. In the future, the recipe was improved and various fruits were added to the drink.

The whole world recognized sangria in 1964 at the international exhibition in New York in 1964, where it was presented by Spanish participants. Today, many people love sangria, especially during the hot season (summer). It goes well with meat dishes. The modern traditional recipe includes red wine, a variety of fruits (oranges, apples, peaches, pears, apricots, pineapples, limes, tangerines, lemons and even watermelon or melon!), sugar, cinnamon, ice. Sometimes seasonings such as ginger and cardamom are added. Some enhance the taste of sangria with stronger alcoholic beverages - cognac, brandy, gin, rum, liqueurs.

There are also non-traditional recipes: for example, "White Sangria" is made from white wine, and in the preparation of "Kava Sangria" sparkling wine is taken as the basis.

This is a summery and lightest version of red wine. Many indigenous people (including Spaniards) prefer this refreshing drink over sangria. Tinto de verano is a mixture of red wine and soda or lemonade.

Numerous bars often offer overpriced sangria (this is due to the heavy tourist flow, especially during the summer season). But tinto de verano can be drunk at any local institution and at a reasonable price.

Surprisingly, the Spaniards brought this good old cocktail, known all over the world, to a new height, making it the most fashionable drink of recent years.

Gin and tonic, so popular in the best bars of the country, is served in large rounded glasses with plenty of ice and a variety of gourmet toppings.

Another surprising fact for Spain: it's not enough to just order "two beers" here. The variety of varieties here is much wider than you might imagine. Spaniards and locals most often order beer in "cañas", small glasses that keep the drink cool and refreshing. Some prefer "doble", which is twice the size, or "harra" - a mug. Bottled beer lovers should memorize the words "boteyin" and "tercio", which denote bottles with a capacity of 250 and 330 ml. Fans of shandy (a beer mixed with lemonade) will benefit from its Spanish name "clara con lemon".

Cider is a low-alcohol drink, usually champagne, obtained by fermenting apple, less often pear or other fruit juice without the addition of yeast. Common eaten apples are not suitable for cider production due to their low tannin content. Here, special varieties bred specifically for this purpose are preferred. The strength of the drink, as a rule, is from 1 to 8 vol. %. Cider is famous for the northern regions of the country - Asturias, Galicia and the Basque Country. Asturias accounts for 80% of the total volume of cider produced in Spain. You can try it all over the country, and specialized bars called "sidreria" are best suited for this. The art of serving cider is to hold the bottle over your head and pour the drink into a wide glass to create bubbles. Also a very refreshing and light drink.

Vermouth is so popular in Spain that it even has its own legal time of day - exactly before dinner, when the inhabitants of the country, especially Madrid and Catalans, gather and drink a glass. To make the experience even more authentic, it is worth ordering draft vermouth, which in Spain is called "de griffo".

Yes, it is HOT chocolate. It is impossible to leave Spain without trying the traditional local pastry churros with hot chocolate.

It has nothing to do with the watery drinks, more like cocoa or chocolate milkshake, often served under that name in other countries: Spanish hot chocolate has a very thick texture and rich flavor. This is chocolate, but only in liquid form.

Dry white wine chakoli is produced in the Basque Country. The local drink is called Txakoli, a lightly carbonated light white wine. Basque wines are an invariable attribute of local cuisine. The special wines of Chakoli have been produced for over 100 years, and the peculiarities of the technology are carefully preserved by the locals. No wonder, because this particular drink is one of the most significant sights of the Basque Country. Even in the dark ages, Chakoli producers and those who helped them enjoyed benefits.

However, this drink can be found throughout the country - it is generally a traditional Spanish drink served in Basque cuisine establishments along with tapas or pintxos. Like cider, chacolis are poured into glasses from a height so that the wine sparkles.

This drink, which is also home to the Basque Country, is prepared by mixing red wine and Coca-Cola in proportions of 1:1. He is very fond of young people: kalimocho is popular among participants in the so-called "botellones", or mass drinking of alcohol on the street. However, now it can be ordered in almost every bar in Spain, where kalimocho is served with a lot of ice.

With the advent of summer, the drink horchata (HORCHATA DE CHUFA) appears in shops in Spain, in cafes and bars. And in Valencia, they sell horchata even on the street, just like kvass was sold here in Soviet times.

Horchata is made from a dried fruit, a plant called chufa - earthen almond. In appearance, horchata resemble milk, although the taste is completely different. The taste of the drink is sweet. Horchata is a high-calorie drink, high in iron and potassium. It is also valuable for the lack of sodium and high content of minerals and vitamins. In general, it is traditional for Valencia. Its production is controlled by its own regulatory board.

Thanks to her, the town of Alboraya gained the greatest fame. On the streets of the city, there are many specialized bars where you can try horchata.

This drink owes its name to the Andalusian city of the same name, where it is produced. As in the case of champagne, the name of which can only be carried by sparkling wines from the Champagne region, only wine produced in the vicinity of Jerez de la Frontera is called sherry. Sherry is a fortified wine.